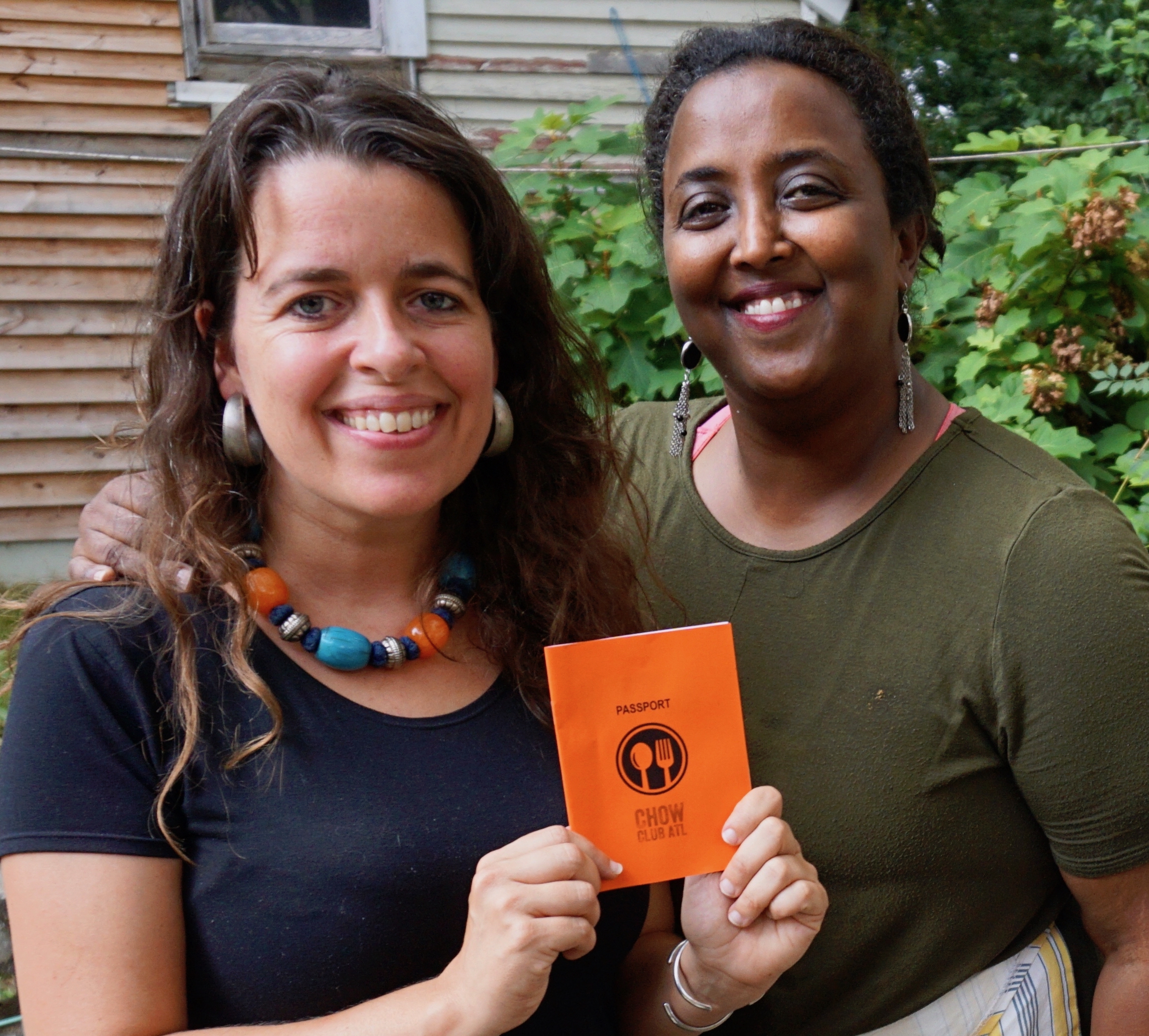 Yohana Solomon was born and raised in Ethiopia and came to the US in 1998 due to a civil war. She is the owner of Atlanta Underground Market and chef and owner of Kushina Catering, which specializes in authentic Ethiopian cuisine. Yohana is also co-founder of Chow Club Atlanta. She currently resides in Atlanta, Georgia, with her daughter.

Amanda Plumb is co-founder of Chow Club Atlanta and author of Uniq ue Eats & Eateries of Atlanta. She lives in East Atlanta with her dog, Pepper, and three chickens.

GSIC: Tell me about the challenge you’re focused on addressing and why it’s critical that an organization like Chow Club exists.

Yohana: From an immigrant and refugee perspective, when you’re in a country where you don’t know anybody, you don’t know the ins and outs of the country, and most of the time, you’re escaping some dire situation back home. Most immigrants and refugees are good at feeding people – especially cooking for a large number of people. They have a skill but don’t know what to do with it. And I believe Chow Club gives an opportunity for those individuals. It’s a platform to cook, make some money, and at the same time, tell their stories. That’s one good thing we’ve managed to do – it’s a great way for the foodie community to learn about a different culture. You also get to try amazing food!

Amanda: Yes, I agree! Even for folks who aren’t immigrants, some people enjoy cooking, but they don’t know how to market themselves or get a following on social media. So, we’re helping other small businesses, though primarily immigrants and refugees, build their brand by putting a spotlight on them for a month. Our customers want to learn about other cultures. They’re curious and want to try new foods, but maybe they don’t feel confident walking into an Ethiopian restaurant in Clarkston or don’t know what to order and where to begin. So, we take people through this journey through the food.

We also started the dinners when Trump was in office. People were looking for ways to show solidarity and support people from other countries. You’re not only learning about new cultures, but at the dinners, you’re probably sitting with people you’ve never met before. So, you’re meeting new people, and it’s a great communal experience. Food is intrinsic to all of humanity – people love their food and tend to show their love and express themselves through food.

Yohana: Food is a universal language. And, where else can you meet, for example, a person from Liberia? We have a Liberian chef hosting our dinner next month. People may have heard stories about war and other hardships in Liberia, but people often don’t know the rich culture, the food, and the beauty of the country. Where else can you go to meet somebody from Liberia, try their food, and hear their stories? What an amazing opportunity! 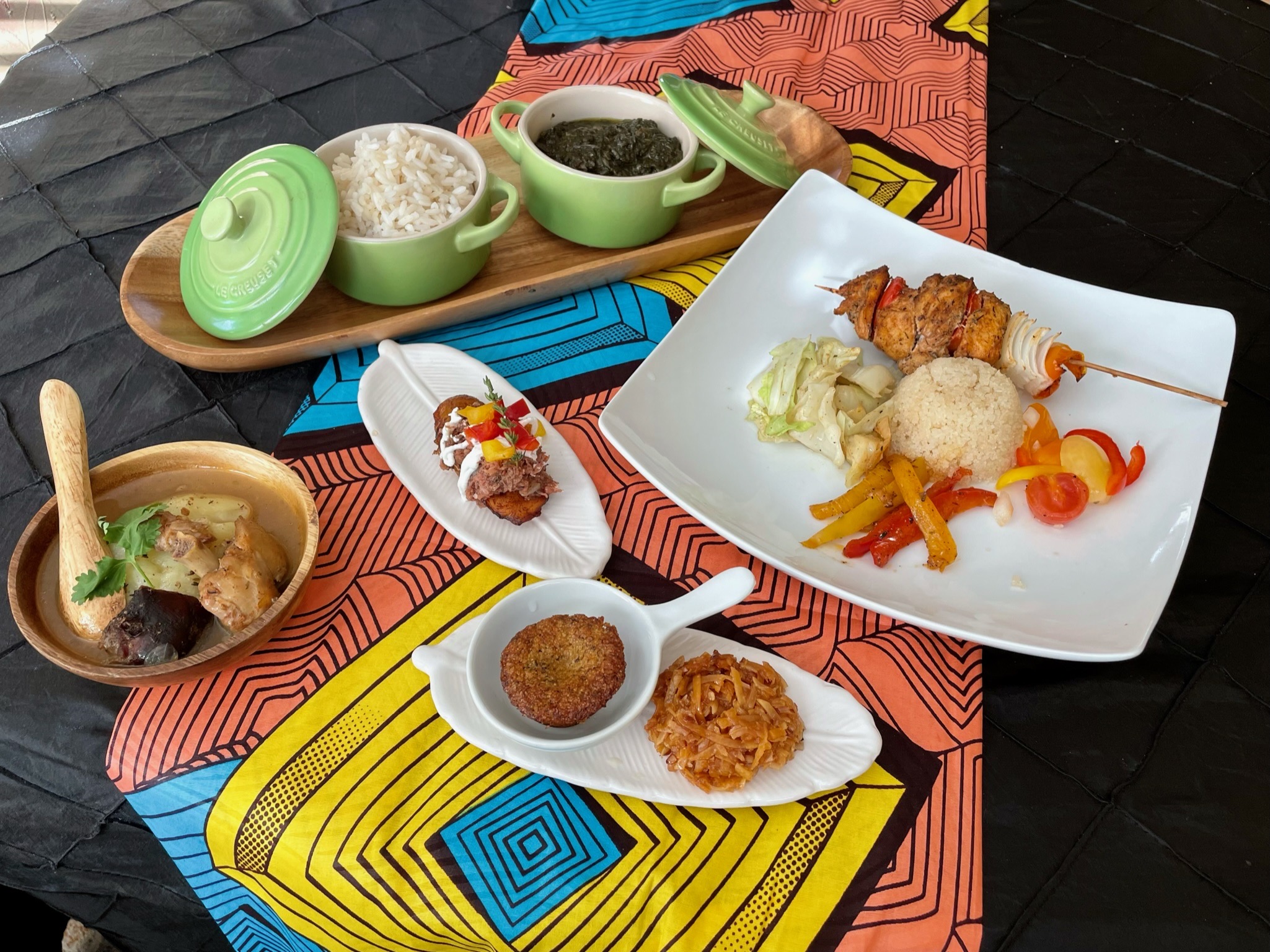 GSIC: That’s amazing. Food is definitely a quick way to the heart! How did Chow Club get started and how has it evolved over time?

Yohana: I used to do the Atlanta Underground Market, where I had the pleasure of meeting and working with chefs from all walks of life. Amanda used to host pop-up dinners at her house. One of Amanda’s friends celebrated his birthday, and he wanted Ethiopian food. She called and asked me where to go for the best Ethiopian food, and I jokingly said, “my house,” since I catered on the side. So, she had me host the dinner at her house. It was great, people enjoyed it.

From that time, we looked at our relationships – the vendors, the chefs, the people on our email lists – and thought why don’t we start hosting these dinners at Amanda’s house, featuring different chefs each month? That’s how we started, and it’s been a blessing since then.

Amanda: Right. The dinners actually started in my home in East Atlanta, very organically. I don’t think we were trying to start a business, but we enjoyed hosting the dinners and kept doing them. Eventually, we decided to turn it into a business. We hosted them at my house for about a year and a half, and we outgrew it. Since the pandemic, we’ve been at Underground Atlanta and are now planning to move to a space called Uptown Atlanta. It’s a new development near the Atrium. For the most part, though, things have been pretty much the same. I think that’s the really nice thing about our model and being so small. We can test things out, try out new ideas, and see what works and what doesn’t.

Amanda: I think the only thing we have is our relationships. Yohana knows a lot of different chefs, and I got to meet a lot of chefs, too. And we’re always looking to expand that network. Our chefs support each other; they tend to volunteer at each other’s events, give each other tips, and get to know each other, which is important.

We have a group called our ambassadors, which are our customers that have been to five or more dinners. We’ve had some customers with us since day one – it’s something they do every month like clockwork. We always have new people that come to Chow Club, too. We’re actually going back to what we used to do, putting people at communal tables. Starting this month, we’re giving people a choice to either sit by themselves or sit communally. This way, our customers get a chance to meet new people and build connections. We’ve had people make business connections at Chow Club and others who decide to come together every month for dinner. We also use the space to promote other small businesses. We want it to be a place for everyone, where everyone wins or can benefit.

Yohana: Right! We’ve also managed to build Chow as a place that’s more than eating good food. We managed to build a community that enjoys being at the dinners and supports each other. We have clients that would literally follow us wherever we go.

We also source chefs from everywhere. Most of them are connected to the refugee and immigrant centers around the Clarkston area, but many are from all walks of life. For example, Amanda might go to a pop-up market, see some interesting food, and talk to the chef. I might go to Clarkston to buy some injera and meet a chef from Nigeria while there. We’re always looking for somebody that wants to tell their story, someone that wants to start catering or launch a food business. We look everywhere for our chefs.

And once they join us, we really consider them to be a part of our family. So, if we hear of events or other opportunities, we let them know about them. It’s not like, “You’ve done a dinner for us, bye-bye.” Instead, it’s more like, “You’re a part of our group now; how else can we support you and provide you with the resources you need?”

Also, during dinners, the chefs will come and talk about their menu and the story of each course. They’re always available throughout the dinner to answer questions so our customers can learn more. It’s very interactive.

Amanda: Absolutely. Another thing we do that helps build the community is our passport book. When people come to Chow Club, if it’s their first time, we give out a little orange passport that says, “Chow Club.” Every time they come, they get a sticker representing a different country they’ve ‘visited’ through our dinners. We want people to know that they’re officially part of Chow Club once they join us for dinner and have some ownership of that. 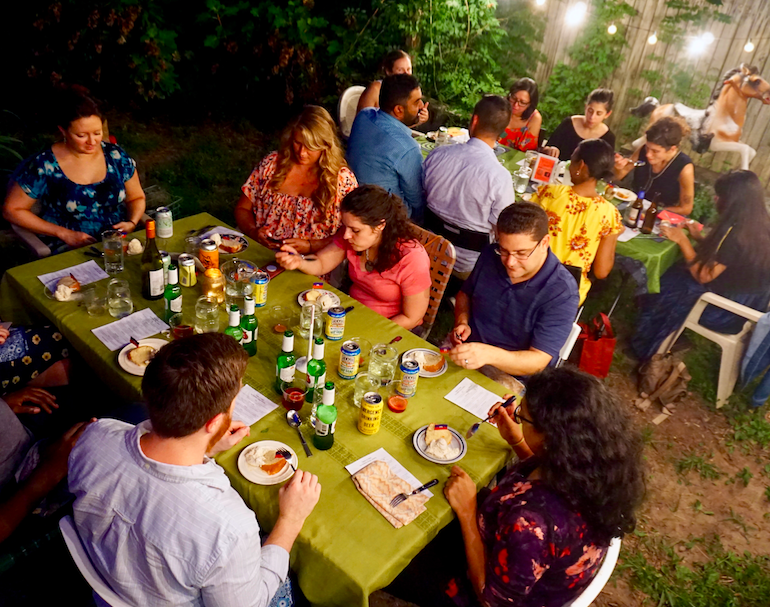 GSIC: That’s wonderful. What do you think is Chow Club’s superpower, and what is a favorite moment about doing this work?

Yohana: Our superpower is connecting people, for sure. We created this awesome community. One moment that stands out to me is during the travel ban around 2018 or so when the Syrian war took place. We met this beautiful Syrian mother and son, who were both refugees. We formed a friendship with them and could hear their fear about not feeling accepted in the United States. They didn’t know if they would fit in and had a fear that everyone hated them. As a refugee myself, I know that fear and could understand why they felt that way.

So, we decided to host a Chow with them cooking. Many people asked how they could support the Syrian community, and we felt Chow was a great opportunity. We thought people could learn about the culture, and at the same time, the mother and son could connect with the community. I remember them being so nervous because they weren’t sure if people would like their food or like them. But the amount of support and love they received at that dinner brought tears to my eyes! It was such a beautiful moment to see people connect in that way – just as human beings.

Amanda: Yeah, that was such a special moment! Another reason Chow is really cool is that most of the chefs we work with don’t have their own restaurants or food business. Some of them already do catering, or Chow Club might be the first time trying catering. For many of them, this is the biggest event they’ve ever done. Just seeing the pride and sense of confidence that comes with hosting the dinner and having so many people tell you that they love your food is wonderful. Chefs don’t always get that feedback when catering or even at a restaurant – customers don’t always go back and tell the chefs they enjoyed the food.

I agree with you, Yohana – that moment with the Syrian family took Chow up another level. All our chefs who make these delicious meals often learned to cook from their grandmothers and mothers. They’re proud of their food; their family knows they’re a great cook, so does their community back home. But having someone they’ve never met before, validating them, and being excited to learn about them is special. At the end of the night, we always try to convince the chefs to go out, move from table to table and talk to people. Though the chefs can feel a little awkward, the customers love it! The customers get to ask questions, and the chefs get feedback, too. As a chef, you’re like a celebrity for a night at Chow Club!

The next dinner will be a Liberian dinner with Chef Carmenia Morgan Tyrus on May 6 and 7. Sign up to attend at https://chowclubatlanta.com/ols/products